From 2013 to 2018 I´ve been one of the five members of the selection panel for the BRIAN MERCER RESIDENCIES in Pietrasanta, Italy. Pablo was shortlisted for the interviews of the last five sculptors in 2015 and I was so impressed by his attitude and energy that I invited him to work in my studio.

So he actually started the " HOME OF THE WELDER" micro residency and since then I invite each July a younger sculptor to use my workshop and my machines. It is enriching and fun for both sides ! Pablo de Laborde Lascaris MRSS was followed by Sol Bailey-Barker MRSS in 2017 and Ed Jones MRSS in 2018.

The sculptor Adeline de Monseignat MRSS will be here in 2019. 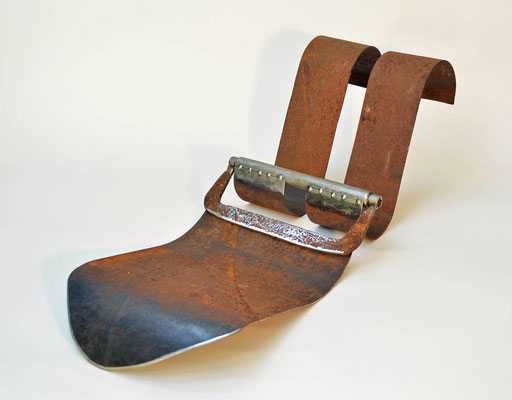 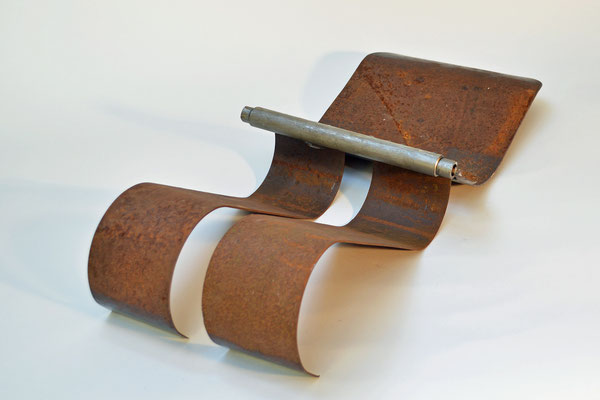 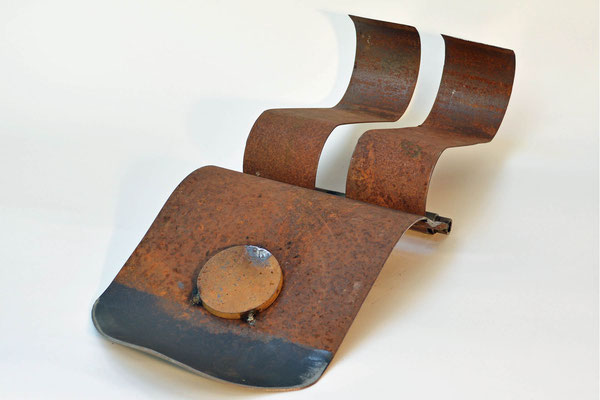 In June 2016, I was invited to do the first run of a Micro Residency Program by fellow sculptor of the Royal Society of Sculptors, Hex.

Hex got to know my practice through an interview I had done with him in London earlier that year. We struck an interesting dialogue about objects, ideas, artefacts but also ‘things’, as he called them.  We further discussed the importance of producing sculptures, which have a strong link to functionality, bridging the gap between a conceptual idea and a functional object.

Hex is an artist with extensive knowledge on steel, in particular stainless steel, and instantly offered to help me produce more of these artefacts to continue my artistic endeavour.  I had, at that moment in time, made little use of steel in my practice which was predominantly wood based.  The idea of working with steel in a fully equipped workshop was therefore naturally well received.  Only a few emails sufficed and Hex had already organised for me to take up residence in his home and studio space in the Bavarian countryside for a two-week period.

Cycling to and fro his studio every day for an early start in his workshop allowed me to develop a steady daily routine to my work.  Initially I experimented a lot with all the tools and scrap metal Hex had to offer, learning as much as I could from his method of working and establishing myself into his studio as I learned more about working steel through his wonderful set-up.  This process did lead me to eventually finding a process and technique which best suited my way of working.  Rather than welding and assembling I was fascinated by the potential of the forge and its possibilities of folding, bending, and shaping steel in its raw form.  From the rough finish to the natural patina this process gives to the material, the forge was completely adequate to the ideas I was aiming to develop.

My short introduction to working with steel, allowed me to produce a series of maquettes and ideas which I am sure will continue to nourish my practice for years to come.  This opportunity also came at a decisive point in my life when I left my London studio to settle into a larger new space in Mexico City.  I now aim for this new space to incorporate a fully functioning forge at its heart.  My experience with Hex has given me the necessary confidence to do so, as I now fully comprehend the potential of steel and is allowing me to merge my practice up until now with new knowledge in order to produce an even greater and more ambitious array of ‘things’ and artefacts.

Hex gave me all the tools and raw materials necessary to make work, including a trip to his local scrap metal junk yard, and multiple cultural excursions, from traditional Bavarian festivals to a number of social art events in Munich.  Hex and his wife Ina were fantastic hosts and mentors throughout this residency and I cannot thank them both enough for all they have done for me.

‘The home of the Welder’ Hex’s Micro Residency, Bavaria

I was lucky enough to be invited to work in metal at Hex’s studio in the Bavarian region of Germany about an hour from Munich. Having really only dabbled in steel when I was at college, this opportunity provided me with a whole new set of skills and horizons in my practice. On arrival Hex’s overwhelming generosity and skill set enabled me to explore the precious artisan’s techniques of the welder. A workshop far more equipped and advanced than anything I’ve been accustomed to helped me shape a series of work which is instantly being recognised in a British documentary about metal sculptures.

If I could set a scene of a perfect working environment this would be it. My digs were at a craft brewery which served the best beer I have ever had. I cycled to the studio everyday through some of the most picturesque hop fields in the world and not only did I get cooked some amazing food I was able to use any metal based material I set my eyes on!

I can’t thank Hex enough for accommodating me not only in his busy schedule but in his everyday life. I had a wonderful time in Munich which introduced me to new, challenging art and I highly recommend this to someone who wants to expand their world!